Rheometry in rubber industry is mainly performed using Mooney rheometer or Moving Die Rheometer (MDR), measuring far from the range of processing deformation. Because of the non-linear behavior of the materials a prediction of processing behavior is often not possible due to missing selectivity or even wrong prediction. Rubber materials contain waxes and plasticizer, which lead to slip behavior in processing. Conventional rubber testing instruments does not include this effect in the processing data while a Rubber Capillary Rheometer (RCR) can give nice predictions of difficult processing areas. With the RCR GÖTTFERT is bridging the gap of Elastomers or Rubber Characterization and Processing. Wrong processing behavior often is recognized after starting production. This leads to a waste in production time and material. GÖTTFERT is providing a solution to characterize rubber materials in the range of processing.

For rubber testing the device is able to operate in injection and extrusion mode and is equipped with a piston, a test chamber (short barrel) with die and mold. In the extrusion mode the test is similar to a regular capillary test to measure the flow behavior. The RCR allows running multiple speed or pressure steps within one test, thus a flow curve can be obtained in less than 5 minutes including cleaning. In the injection mode, the mold is closed and an injection molding test can be performed. Heat insulation between Chamber and mold allows to set different temperatures in the plasticizing area of the chamber and mold similar to the cold runner injection molding principle. 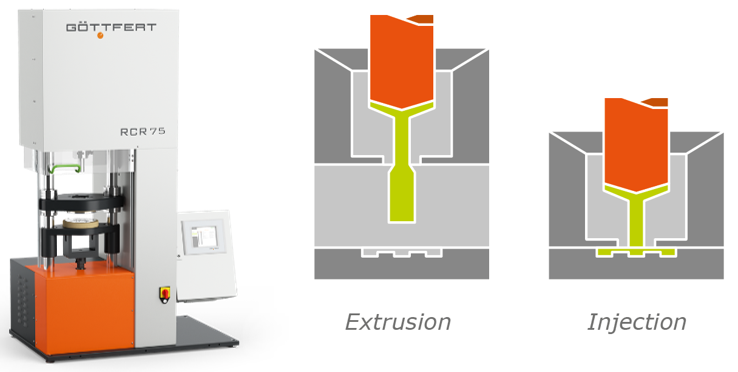 The shear rate of rubber processing differentiates between different kinds of application like compression moulding or injection moulding. Figure 3 shows the different shear rate ranges of the specific application. It also illustrates a rubber test with an MDR, RPA or Mooney Viscosimeter is not suitable for a prediction for rubber extrusion or injection molding processing. Even the so called rubber process analyser RPA just reaches shear rate only the lower end of extrusion processing. Although calculated circular frequency can reach values up to app 600, the transfer of the data to steady shear flow in processing dies or flow channels is not possible because COX-Merz rule fails. Cox-Merz rule is known as the transfer from oscillatory data to steady shear flow.

For precise rubber testing in the range of processing under process like conditions you have to analyse your material with a Rubber Capillary Rheometer. The Rubber testing instrument is working in the shear rate range of extrusion and injection moulding. 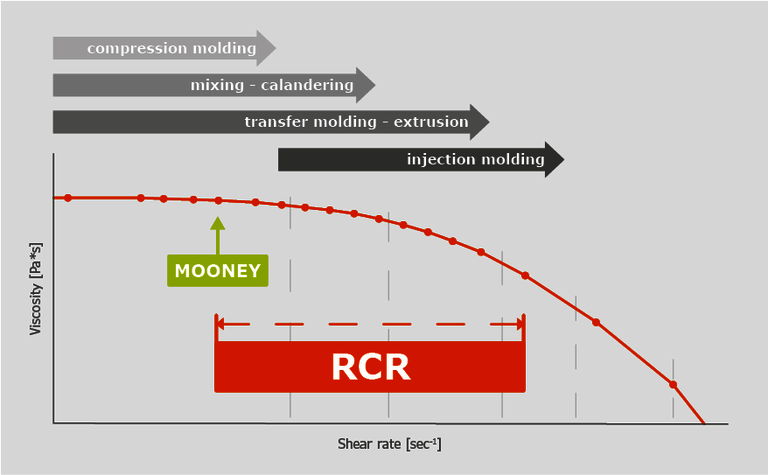 Viscosity test is performed in extrusion mode in a two-step mode of different pressure using RCR for different SBR raw polymers and compared to Mooney viscosity data. Fig. 2 shows a 30% difference at high pressure generating high shear rates while Mooney measurement shows less than 4% difference which is near the area of Mooney measurement selectivity but also in a reversed order. For the low pressure step at the RCR, the difference between the materials is lower and in the same order as the Mooney test.

Measurement in injection mode is performed on two batches SBR compounds of different processability and compared to conventional vulcanization measurement measured with a moving die rheometer in Fig. 3. Vulcanization measurement (left) shows only slight difference in loss angle and the increase of torque while the volume curve gives about 30% differences among the batches. The given test results of a RCR are very important indicating the problems of processing to understand the behavior of the material in processing conditions. 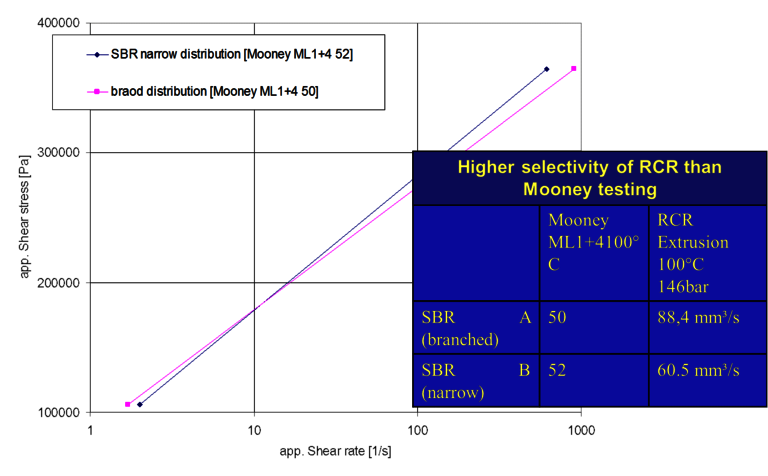 Figure 4: Comparison of different batches between Vulkameter and RCR

The processability test with the RCR is a fast and a more effective QC test than conventional tests like using moving die rheometers or rheometers for mooney viscosity. The RCR is able to test in the processing range of injection molding and extrusion. As seen figure 3, there are differences between material behavior between the range of processing and rubber testing with an MDR, RPA or Mooney Viscosimeter. With the RCR 20 and RCR 75 GÖTTFERT is providing two instruments with 20 and 75Kn to close the gap between prediction and rubber testing in the range of processing. 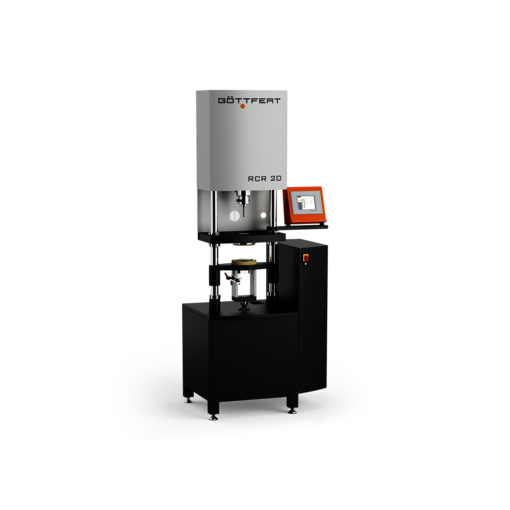